Theme
Industry of all Nations

The first ever World Expo

The first World Expo, ‘The Exhibition of the Works of Industry of All Nations’, commonly known as the Great Exhibition of 1851, was held in London between 1 May 1851 and 11 October 1851. Taking place in the midst of the industrial revolution, the event was an occasion for the United Kingdom and international participants to showcase human progress, notably in the area of industry and technology.

The Expo, which featured exhibitors from 25 countries, was masterminded by Prince Albert, the husband and consort of Queen Victoria, and Sir Henry Cole, a young civil servant who had a passion for the arts and industries. The two men were introduced at the Royal Society for the Encouragement of Arts, Manufacturers and Commerce, of which Prince Albert was the President. Inspired by the French ‘Industrial Exposition’ of 1844, the duo sought to organise a similar event at a larger scale for ‘All Nations’, with the aim of educating the public about technical progress and showcasing British design and manufacturing.

Thus, on 30 June 1849, it was confirmed at Buckingham Palace that an international exhibition would be held under the auspices of the Royal Commission for the Exhibition of 1851, headed by Prince Albert.

The first World Expo was housed in the magnificent Crystal Palace, an immense iron and glass structure specially built for the event in Hyde Park. The organising committee required a building that was inexpensive, large enough to host the exhibits and thousands of visitors, and simple enough to be disassembled after the Expo. After rejecting more than 200 proposals, the committee selected the proposal submitted by Joseph Paxton, a landscape architect and horticulturalist who had experience in building greenhouses. 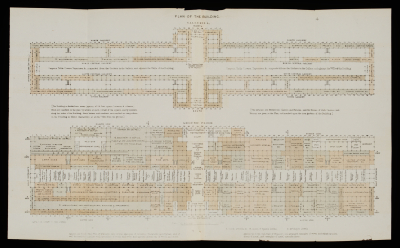 The immense iron and glass structure, spanning 563 metres long by 124 metres wide, was built in only a few months thanks to its modular design and reliance on prefabricated, standard-sized components. With more than 300,000 glass panes, the structure offered an immense and naturally-lit area of 92,000m2 for exhibitors to showcase their inventions, art, products and ideas.

A new era of public interaction

As the first event ever organised on this scale, Expo 1851 shed light on social changes and sparked innovative new ideas and approaches. While Victorian society was highly stratified, the Expo was a rare opportunity to bring different parts of the population under one roof. This was amplified by the possibility of cross-country travel thanks to the United Kingdom’s expanding rail network. The initial ticket price largely prevented working class people from attending, so the Organisers opted to introduce ‘shilling days’, with the modest price of one shilling per ticket, making the Expo accessible to all. The event drew significant attention from workers’ unions and trade associations across the country, with many of these groups organising transport, tickets and accommodation on a formal basis – setting the basis for modern package holidays and group excursions.

In terms of the practical and logistical challenges of welcoming thousands of exhibitors and visitors, the Expo paved the way for future mass events. In a sign of increased hygiene, the Organisers commissioned George Jennings to install the world’s first public flush toilets in the Crystal Palace’s ‘Retiring Rooms’. Visitors were charged 1 penny to use the facilities, leading to the expression “to spend a penny”.

Inside the Crystal Palace, there were displays of over 100,000 objects, with “every conceivable invention”, on show, in the words of Queen Victoria. There were a total of 17,000 exhibitors, around half of whom came from the United Kingdom and its dependencies, with the other half coming from 24 countries around the world. The exhibits were grouped into four divisions: raw materials, machinery, manufactures, and fine arts (including architecture and sculpture, but not paintings).

Many of the innovations displayed at Expo 1851 were icons of the industrial era, with exhibitors explaining to the curious public how each technology could contribute to progress for all. Such inventions included the latest locomotives displayed by the Great Western Railway, machines that turned raw cotton into finished cloth by Hibbert, Platt and Sons, the hydraulic press by Robert Stevenson, and Augustus Applegath’s printing machine that could make 5,000 copies in an hour. In addition to the machinery on display, visitors’ attention was drawn to numerous new products and services, including an early fax machine by Frederick Bakewell, ‘tangible ink’ for the blind, stereo photographs, and a three-room display of the uses of vulcanised rubber – a newly patented product by American firm Goodyear. France’s section impressed visitors and exhibitors alike with a grand display of the country’s artisanal savoir-faire, including Lyon silk, Sèvres porcelain and Limoges enamel.

At its closing on 11 October 1851, the Great Exhibition was considered a tremendous success: the event received more than 6 million visitors and made a profit of £186,000 (equivalent to over £18 million today). The Royal Commission for the Exhibition of 1851 invested this money in the creation of a new district of science and learning in South Kensington. The aim of this investment was to “increase the means of industrial education and extend the influence of science and art upon productive industry”, according to Prince Albert. Colloquially known as ‘Albertopolis’, the district is today a hub for education and culture, and includes such institutions as the Victoria & Albert Museum, the Natural History Museum, the Science Museum, the Royal Colleges of Art and Music, Imperial College, and the Royal Albert Hall. The Royal Commission for the Exhibition of 1851 still exists to this day, awarding educational grants and scholarships in the areas of science, research, design, built environment and enterprise.

The Crystal Palace itself was disassembled, as planned, and rebuilt in Sydenham Hill in south London. In the following decades, the venue served multiple purposes, including as a concert hall, a museum and a botanical garden, before it was destroyed by a fire in 1936.

The UK, leader of technical progress

The organization of the event came in response to the demand for creating new economic links between nations in face of the triumph of the free trade policy. As a result of the efforts of Prince Albert, the husband of Queen Victoria, and the inventor Henry Cole, the Expo was organised in London with great success.

The Crystal Palace, symbol of the Expo

A special commission headed by Prince Albert designated the famous Hyde Park as the Expo site. The commission launched a competition for the building that would house the exhibits. More than 250 projects were submitted. The project of Joseph Paxton, later called the Crystal Palace, was selected. It became the architectural masterpiece of the time and even now its dimensions are still impressive: length - 563 metres, width - 124 metres,  floor area – 7,18 ha, height of the main nave - 19,5 metres , height of the cross nave - 41 metres. Some time after the exposition closed, the Palace was transferred to Sydenham Park to host exhibitions, sporting events and music festivals. Unfortunately the building burnt down in 1936.

"I'm not saying there's nothing to see, but that there's too much to see," Charles Dickens said after visiting the exhibition. The most impressive section was dedicated to machinery where visitors could discover the railroad equipment from UK and Germany, steam engines and American farm equipment, which was almost unknown in Europe.
Stereo photographs by the Scottish physicist David Brewster, vulcanized rubber by the American inventor Charles Goodyear, the so called "Viennese chairs" by the Hungarian furniture-maker Tonet, the 1,720-kilogram ingot of crucible steel produced by the Krupp's plant and many other new products were showcased at the Expo.

A success that allowed the cultural development of London

The Fair attracted nearly 6 million visitors and allowed the organizers of the exhibition to generate a profit of about 186,000 pound sterling. This money was used to fund a number of cultural and educational institutions such as the Geological Museum, the Museum of Science and Natural History, the Museum of Manufactures (known now as Victoria and Albert Museum) and the Imperial College of Science.