Theme
Fourth centenary of the discovery of America

A project to boost national identity

The Exposition aimed at building a sense of national unity, encouraging confidence and pride in American goods and business. It was the perfect way to explore social transformations, educate people and reduce their fear of change. The Expo was also an occasion to promote the technological and cultural achievements of the United States.

Renowned landscaper Frederick Law Olmsted, designer of NYC's Central Park, chose to place the Expo on the shore of Lake Michigan. Olmsted's project was ambitious. He not only planned to drain and reclaim the ground but also to dredge the lake waters to create canals and lagoons all along the Fair site. The undertaking was successful. The site of the Columbian Exposition was nearly three times bigger than any other previous fair site and the landscape was beautiful. The 14 main pavilions, known as the Great Buildings were conceived following classical architecture. They were all clad in white stucco and illuminated by city lights, which gave the Expo its nickname of « White City ». 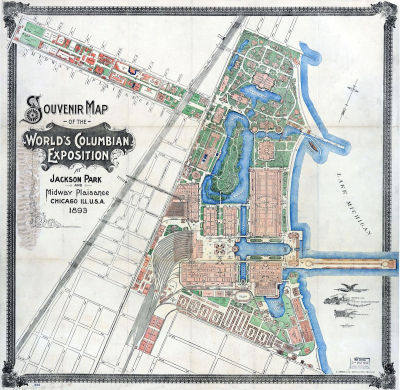 An Expo of "firsts"

The Columbian exposition was a Fair of many innovations and many « firsts » both from a cultural and a technological point of view: it displayed the Thomas Edison "Kinetoscope", the first elevated intramural railway, the first movable sidewalk, the first picture postcards and the first commemorative stamps and coins. The Columbian Fair also broke the record in electrical energy consumption: the Expo required 3 times the electric lighting power in use in Chicago at that time.

One of the most important innovations exhibited was the first building to be entirely dedicated to the work of women in all fields but also exclusively designed and managed by them.

The most distinctive feature of the Expo was The Midway Plaisance : a one-mile strip of land entirely dedicated to entertainment. It became a model for future amusement parks such as Coney Island and even Disneyland. The most popular attraction was George Ferris' "Big Wheel". Built to rival the Eiffel tower, this colossal 250 feet diameter wheel became the symbol of the Columbian World's Fair.

An Expo to be remembered

The Columbian World's Fair was a great success and has left important architectural, scientific and cultural impact. It even provided the United States with a new Holiday: Columbus Day, and a new Star on the City of Chicago flag.