Theme
Commemoration of the 75th anniversary of independence

Expo 1905 in Liège coincided with the 75th anniversary of Belgian independence, and was aimed at showcasing the achievements of Belgium’s scientists, doctors and engineers.

The Expo site was developed on the flood-prone Vennes area of the city, which required a significant amount of ground preparation as well as the construction of new bridges and roads. The Fragnée bridge over the River Meuse remains to this day, and is reminiscent of Pont Alexandre III in Paris. Another significant legacy of the Exhibition is the Palace of Fine Arts, located in Parc de la Boverie. 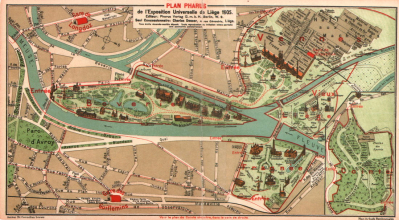 Around 100 Walloon style houses and the Saint Lambert church were reconstructed for the Expo to be part of the “Vieux Liège” attraction, which proved to be very popular with visitors.

The Expo featured over 80 pavilions and 17,004 exhibitors, making it the largest Expo to date to take place outside of France and the United States in terms of the number of participants.

There was notably a large number of French exhibitors, with highlights including a fingerprint identifying magnifier showcased by the Paris police, as well as Léon Gaumont’s Chronophone projector, which was one of the first devices to synchronise film with sound.

Visitors from all over the globe

The organisers of the exhibition put great efforts into attracting as many international participants and visitors as possible. Brochures were sent to hotels and trains all over the world, and journalists were invited to visit the pavilions while they were being constructed. Once it was opened, the Expo was visited by a number of foreign dignitaries, including those from afar afield as Russia, Persia and Japan.