During the 107th session of the General Assembly of the BIE in June 1990, Member States elected Germany as the host country of World Expo 2000.

By hosting the Expo, Germany – which had only recently reunified – called on countries from around the world to present their vision of a future society and to propose models of governance and policies aimed at a better balance between mankind, nature and technology. 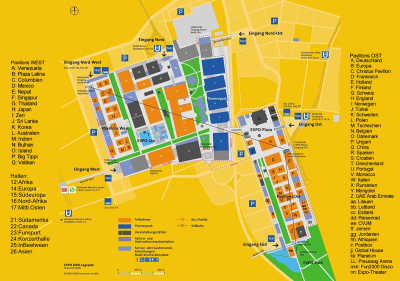 In June 1994, the BIE General Assembly adopted a resolution regarding the sustainability of Expos, which notably requires Organisers to plan for the re-use of the Expo site and infrastructure following the event. The Expo 2000 site, covering 160 ha, reflected this resolution, with a 90-ha area being developed from the already existing Hannover Messe site, and the rest of the site developed to become a part of a residential eco-district known as Kronsberg. The planning of Kronsberg focused on low energy housing and passive buildings, with the district becoming a model in terms of ecology, social mix and landscaping.

For both Organiser and Participants, it was essential that the development of the site responded to strict guidelines regarding sustainable development, which were codified in the Hannover Principals.

As a result, several pavilions used bold and advanced techniques in their construction. Switzerland’s pavilion, for example, designed by Peter Zumthor, was built from 45,000 planks of non-aged wood, assembled without glue. Japan’s pavilion by Shigeru Ban was unique in that it was built using a ‘paper tube technique’ with recycled paper from Germany.

Sustainable development was also notable in the interpretation of the theme among international participants. The Netherlands, in a pavilion designed by MVRDV, responded to the challenge of limited space, demonstrating in a 40-metre-high structure how to combine a tulip field, a forest, sand dunes, and wind turbines, all within an environmentally-friendly system generating its own electricity and with a closed water circuit.

The central place of the theme

Some 155 countries from around the world gathered around the theme “Humankind – Nature – Technology”, which was split into several subthemes including environment, energy, mobility, knowledge, information, future health and nutrition. Scientific, cultural, political and business communities also played an active role in the thematic exchanges throughout the course of the Expo, alongside civil society and NGO actors.

At the heart of the site, a “thematic park” was developed to showcase tangible solutions to challenges raised by the Expo 2000 theme, such as knowledge, basic needs, health and energy. Through the ‘Projects Around the World’ initiative, an international jury selected case studies that were exemplary in relation to the theme, all of which were presented in the Global House.

A cross-country exchange programme was established to encourage the transmission of knowledge and the elaboration of policies and strategies in connection with the Expo theme’s sustainable development focus. This initiative involved a series of partnerships and international dialogue sessions, called the ‘Global Dialogue’, which took place before, during and after the Expo. It notably focused on the importance of sharing information in a more equitable way, called for the creation of transversal partnerships between nations, geographical zones and economies, while making the most of new technologies.

Throughout the 152-day Expo, an eclectic cultural and events programme was organised under the slogan “Where Worlds Meet”, taking place on the Expo site, but also in the city of Hannover, and in the surrounding regions. International Participants offered visitors a range of cultural activities, in addition to the national day celebrations. Notable events included Peter Stein’s rendition of Faust, produced in its complete, uncut format lasting 21 hours, as well as performances by celebrated artists such as Pina Bausch, Luciano Pavarotti, Santana, Compay Segundo and Joaquín Cortés. Every evening before closing on the Expo See lake, a light and sound spectacle, Flambee, offered a final highlight for visitors.

Expo 2000 brought numerous upgrade works to the city of Hannover and to the Hannover Messe site. Ahead of the Expo, the city’s transport network was improvement, including upgrades to roads, motorways, the railway station, and the airport, while new tram, metro and railway lines were created to improve access to the Expo site. Along with the construction of new facilities such as the Arena auditorium and the renovation of unused structures into concert halls, these improvements came as a boon to the image of Hannover and boosted the region’s capacity for economic growth and tourism. In the immediate vicinity of the Expo site, the construction of the Kronsberg eco-district formed a key part of the city’s development project and social policy.

Several pavilions – even before the end of the Expo – found post-event uses. The pavilion of Mexico became a library of the Brunswick University of Applied Arts, the pavilion of Ethiopia returned to its home country, and the pavilion of Belgium became a recording studio, to name just a few.

The Global House can be seen as a precursor to the Best Practices Area, which, since Expo 2010 Shanghai, is an essential element of all International Expos. 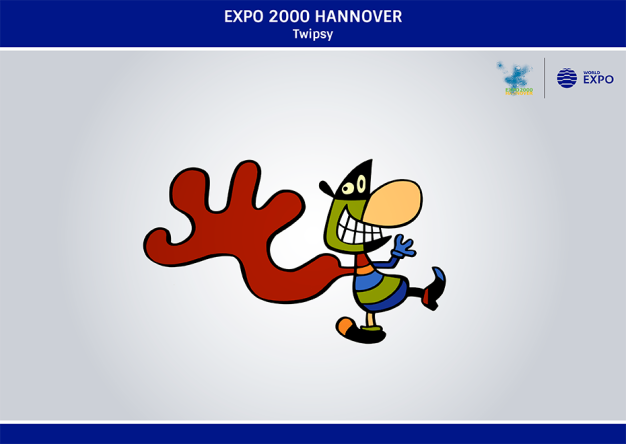 Twipsy, the mascot of Expo 2000, is an abstract character with a unique morphology to represent the diverse theme of the Expo- ‘Humankind – Nature – Technology’. Twipsy has a colourful striped body in the shape of a water drop, with a half-moon face and a large turquoise noise. He wears one flat shoe and one high heel, and has a distinctive oversized orange arm resembling a wing.

Twipsy’s designer, Javier Mariscal, stated that the mascot comes from “a distant past such as is the Big Bang, a spark in expansion that became a star, a cell, an invertebrate, a reptile, a bird, a mammal…”.

Twipsy appeared in a German cartoon of the same name that started on 1 November 1999. There were 52 episodes of the series, each lasting 13 minutes, and the cartoon was broadcast in 90 countries. The show aimed to familiarise children with Twipsy, who, as a messenger from cyberspace, taught global values and gave an introduction to the internet and modern technology.