165 years ago today, France opened the gates to Expo 1855 Paris, the first World Expo to take place in the country and the second ever, after the Great Exhibition of 1851 in London. Here are some interesting facts about this singular event:

1. The first World Expo in Paris

On a cold and rainy day on 15 May 1855, Parisians gathered around the Palais de l’Industrie, a newly constructed building on the Champs-Élysées, to get a glimpse of France’s first World Expo, being inaugurated by Emperor Napoleon III and his wife Eugénie. The Expo, which was dedicated to agriculture, industry, and fine arts, received 5,162,330 visitors during the span of six months – one of whom was Queen Victoria, the first English monarch to visit the French capital since Henry VI’s coronation in 1431 - and hosted 27 participating countries. 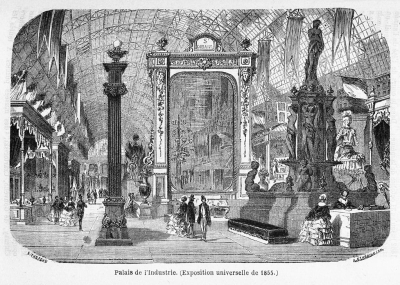 To house all the technological and industrial marvels of the era, architects Jean-Marie-Victor Viel designed the Palais de l’Industrie where the Grand Palais and the Petit Palais now stand. With a length of 250 metres and a width of 180 metres, the immense iron and glass structure was built as a permanent venue for displaying French achievements. After being used again for Expo 1878 and Expo 1889, it was demolished in preparation for Expo 1900. The sculptures that embellished its façade, however, were saved and can still be seen today in the Parc de Saint Cloud, just outside Paris.

3. New inventions for a new era

Prince Louis Napoléon, the President of the Expo Organising body, argued that Expo 1855, and all Expos in the future, should serve “the greatest good for the greatest number”. Influenced by Saint-Simon’s theories foreseeing the industrialisation of the world and believing in the power of science and technology in solving many of humanity’s problems, the Expo presented various innovations that changed the pace of production and lifestyle. Such revolutionary products included the locomotive, Singer sewing machines, Moore’s washing machine, hydraulic motors, the lawnmower, fans, the hydrostatic percolator, capable of producing 2,000 cups of coffee per hour. 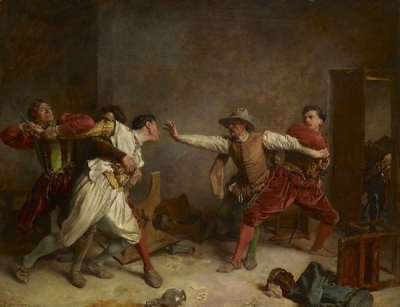 In order to showcase the works of French artists and to add a new element in comparison to the largely product-focused Expo 1851 in London, fine art was a major focus of Expo 1855. The Palais des Beaux-Arts, conceived by Hector Lefuel and situated between Avenue Montaigne and Rue Marboeuf, was the centre of the Expo’s cultural offering. It housed 5,000 works of art, of which 2,700 were by French artists including Delacroix, Ingres, Vernet and Decamps. The Grande Médaille d’Or was awarded to La Rixe by Meissonier, which was subsequently purchased by Napoléon III for 25,000 francs and gifted to Prince Albert as a birthday present. Today, the painting remains part of the Royal Collection Trust of the United Kingdom.

5. One of the Expo 1855 legacies: wine classification

The classification of fine Bordeaux wines, the Grand Cru Classé system, was developed for Expo 1855 Paris. Experts from the wine industry gathered to taste, sort, and rank the wines into five divisions. The highest rank, Premier Grand Cru was awarded to only four wines – Château Latour, Château Lafite Rothschild, Château Margaux and Château Haut-Brion. This classification remained unchanged until 1973 when Château Mouton Rothschild was promoted to the higher ranking, alongside the original four.

Find out more about Expo 1855 Paris