A to Z of Expo Architects: Joseph Urban Austrian-Australian architect, illustrator and set designer Joseph Urban takes the ‘U’ position of Expo Architects for his contribution to World Expo 1933 Chicago. Already known around the world for his vivid creations – including Austria’s pavilion at Expo 1904 St. Louis - Urban created Expo 1933’s dazzling exterior colour scheme and devised its lighting strategy, an essential aspect of the Art Deco style that was the hallmark of the event.

Determined to “use colour and use it boldly” and seizing the opportunity to popularise colour as an architectural and design tool, Urban created an inventive palette comprising 23 shades. Sulphur yellow, dull Persian orange, tomato bisque pink and peacock green are just a few examples of the vibrant colours created for the Expo site. The vivid array of colours led to the site being known as the ‘Rainbow City’ – a nod to the ‘White City’ nickname given to Chicago’s previous Expo in 1893 – known for its vast white-painted façades. 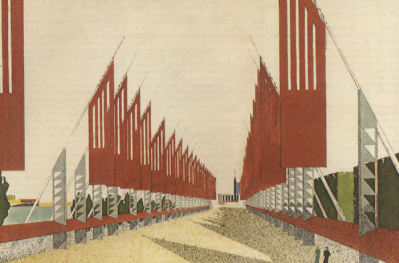 Transforming these colours into enough paint to cover 929,000m2 of surface was a mega-project in itself, leading to perhaps the largest ever paint commission of the era. In addition to the buildings, the colour scheme applied to all decorative elements of the Expo site, including the impressive Avenue of Flags.

Visualising the Expo site as a background for moving crowds, just as he had designed theatre sets as a background for the performers, Urban “injected warmth, texture and motion” into the Expo through the careful arrangement of colours. This was reinforced by his lighting work, using innovative techniques to outline buildings and illuminate fountains.

The colour scheme was a major success, creating a meaningful ensemble that contributed to the Expo’s popularity as a “technicolor marvel” and playing a wider role in the spread of using bright colours in urban settings. Tragically, Joseph Urban was never able to see his work in person as he died – while still in New York – shortly after the opening of Expo 1933.