A to Z of Expo Architects: Mies van der Rohe German architect Ludwig Mies van der Rohe stands out for defining his own architectural style that, combining clarity and simplicity, reshaped 21st century styles. As a pioneer of modern architecture, the last director of the Bauhaus school takes the R spot in the A to Z series for creating Germany’s remarkable pavilion at World Expo 1929 Barcelona.

Commissioned by the German Government to design a representative space incarnating the modernity of the era, Mies van der Rohe teamed with Lilly Reich to create the radical, yet refined structure. Built with marble, travertine, chromed steel and red onyx, the pavilion had an ethereal quality, interacting with light and with the reflections of the rectangular pool that formed part of it. 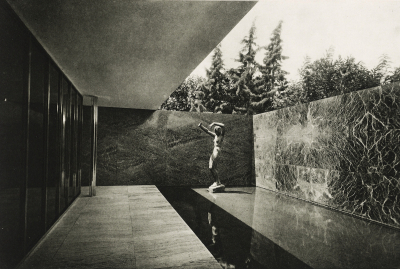 With its flat roof hovering over the offset walls, the pavilion had a simple, continuous form that blurred the lines between outside and inside. Designed by Mies van der Rohe as an “ideal zone of tranquility”, the arrangement of the walls created a series of distinct yet open spaces, giving visitors a path to follow throughout the structure.

Serving as the entrance space to the German section at the Expo, the pavilion was incredibly minimalist; instead of hosting exhibits it was remarkable for the experiential volume it created. The few objects on display were specially designed pieces of furniture; the iconic Barcelona chairs, and George Kolbe’s statue – Alba – overlooking the reflecting pool.

As a temporary structure, the pavilion was dismantled following the Expo. Nevertheless, its modern aesthetic remained legendary, with Mies van der Rohe – who moved to the United States in 1933 – celebrated for continuing to develop his rational style.

With renewed interest in the pavilion in the 1970s and 1980s, a group of Catalan architects reproduced the pavilion between 1983 and 1986, using the same style and materials as Mies van der Rohe had used in 1929. Now known simply as the Barcelona Pavilion, it is one of the icons of the city and remains a triumph of modern architecture.