140 years ago today, the capital of Victoria, Melbourne, welcomed the first World Expo in the southern hemisphere under the theme of the Arts, Manufactures and Agricultural and Industrial Products of all Nations. Here are some interesting facts about World Expo 1880 Melbourne: 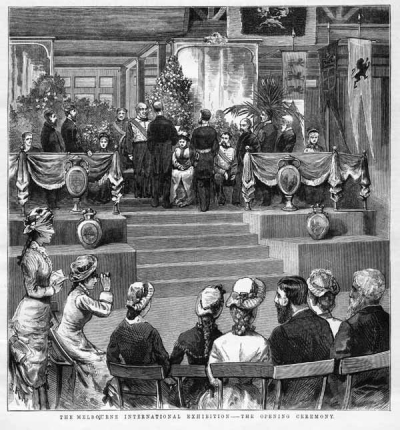 Expo 1880 Melbourne received 1.3 million visitors, equivalent to 154 per cent of the population of Victoria and more than half of the entire population of Australia at the time. Families let their daughters attend without chaperones – a first – and with the ticket price at only one shilling, the event was accessible to almost everyone, blurring social boundaries. This unprecedented mixing of the population was summarised by the Illustrated Australian News, which described the Expo’s social encounters as “old folks and young, the fashionable lady and the yokel… Sarah Jane and her young man, with Master Collingwood and Miss Fitzroy of larrikin notoriety, all mixed up together”.

2. Opening up to the world

With the Expo showcasing a vast array of products and creations from all over the world, visitors were able to experience and discover different cultures. They sampled tea in the Indian and Ceylonese sections, cocoa in the Dutch, and beer in the Austrian and German pavilions. The Expo also broadened opportunities for manufacturers and merchants who were able to establish new trade links between Australia and Germany, France, Belgium, and the United States. The Expo thus marked a key moment for Melbourne, with the city and its inhabitants taking on a more cosmopolitan identity.

3. Industrial innovations from near and far 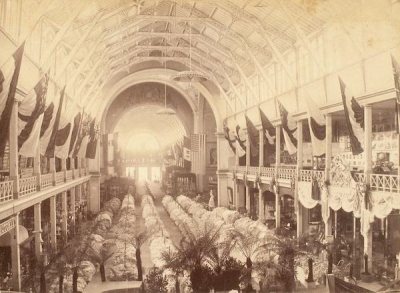 Taking place in the midst of the second industrial revolution, Expo 1880 showcased the latest technological innovations. The United States pavilion in particular featured a number of products that were eagerly adopted by Australians, including agricultural machinery, barbed wire, and electric lights, as well as an early version of the lawnmower. The latter, which revolutionised gardening around the world, won an award and proved so effective that the design remained unaltered for 70 years. Victoria displayed its own technological achievements to the world, including the locomotives from the Phoenix Foundry of Ballarat, which produced 352 steam locomotives for the Victorian Railways between 1873 and 1904.

The Expo played a critical role in the development of Melbourne. The event contributed to the city gaining its first electrical and telephone services, and paved the way for the city’s first tramway service a few years later. Furthermore, new suburbs burgeoned, as well as grandiose office buildings, banks, and hotels. With the creation of more jobs and opportunities, Melbourne had within a decade doubled its population to half a million, making it more populous than most European capitals. 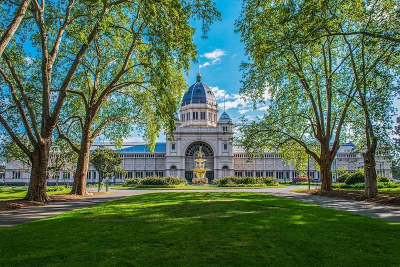 The palace built to host the Expo and the surrounding Carlton gardens were inscribed on the UNESCO World Heritage List in 2004. Designed by Joseph Reed, the structure, today known as the Royal Exhibition Building, is constructed of brick, timber, steel, and slate, and combines style elements of Byzantine, Romanesque, Lombardic, and Italian Renaissance. The Carlton Gardens were designed as typical Victorian-era gardens with tree-lined pathways, fountains and lakes. In the years after the Expo, the venue has had several uses, including the first parliament of Australia in 1901, a makeshift hospital during the Spanish flu pandemic in 1918-1920, an air force training school during World War II, a sports venue during the 1956 Melbourne Olympics, and today, a multi-purpose hall for exhibitions, concerts, graduations, and other events.

Find our more about Expo 1880 Melbourne.