85 years ago today, Expo 1935 Brussels opened its doors to visitors from all over Europe and the world. Here are a few facts about the World Expo that you might not have known:

1. It was the first BIE World Expo

While Expos have been organised since 1851, Expo 1935 Brussels was the first World Expo that took place under the auspices of the BIE – established by the 1928 Paris Convention. The Expo welcomed over 20 million visitors – more than twice the population of Belgium at the time - and offered a well-needed economic boost when the world was still reeling from the Great Depression.

2. The heart of the Expo, the Centenary Palace, was not built for the Belgium’s centennial

A masterpiece of Art Déco architecture and the main exhibition hall of Expo 1935, the Palais du Centenaire (Centenary Palace) now known as Palais No.5, was not actually built for the centenary of Belgium’s independence, celebrated in 1930. With its four statues on the building’s façade symbolising sailing, steam power, horse-drawn transport, and aviation, the Palace echoed the “Transport” theme of Expo 1935, which celebrated the 100th anniversary of the first railway line in continental Europe, connecting Brussels and Mechelen.

3. A Tintin character contributed to the Centenary Palace 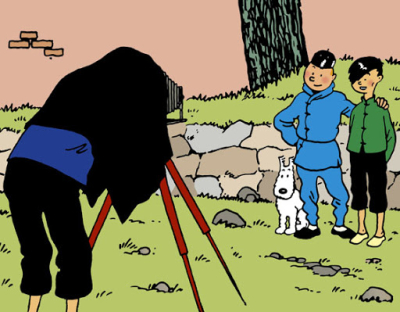 Zhang Chongren, a Chinese-born artist and close friend of Hergé, author of The Adventures of Tintin, contributed to the creation of the façade of the Centenary Palace. Zhang Chongren is the inspiration for the ‘fictional’ character Chang Chong-Chen, who notably featured in The Blue Lotus.

The Walt Disney animations Who Killed Cock Robin and The Band Concert were presented at the Expo’s international film festival and were awarded the Plateau prize by the Association de la presse cinématographique. With the use of the Technicolor innovation in The Band Concert, international audiences were able to see Mickey Mouse animated in colour for the very first time.

French beauty brand Lancôme, founded on 21 February 1935 by Armand Petitjean, presented its first perfumes at Expo 1935, winning a silver medal. After this initial Expo success, it received a gold medal at Belgium’s next World Expo in 1958, organised on the same site.