How is an Expo organised ?

Several years of planning are required to organise an Expo, spanning from the notification of candidature through to the post-event legacy. There are seven steps in the process of organising a World or Specialised Expo.1

The government of the country wishing to organise an Expo submits a letter of candidature to the BIE mentioning the proposed theme, the proposed city and dates, the duration of the Expo and the legal status of the organisers. The letter must guarantee the full support of the government.

To apply for World Expos, candidates must submit their applications between 6 and 9 years before the proposed opening date of the Expo.

To apply for Specialised Expos, candidates must submit their applications between 5 and 6 years before the proposed opening date of the Expo.

There must be at least 15 years between any two Expos (World Expos or Specialised Expos) organised in the same country. If the government submitting the application is not the organiser of the Expo, it must officially recognise the organisers and guarantee the fulfilment of their obligations.

After the six-month candidature phase, all candidates enter the project examination phase during which they present a detailed candidature dossier based on defined specifications. These candidature dossiers are used as the basis for the work of BIE Enquiry Missions that will be carried out in candidate countries.

Enquiry Missions are organised in each candidate country. They are composed of one of the Vice Presidents of the BIE, one or more Delegates of BIE Member States or experts, as well as the BIE Secretary General. These Enquiry Missions assess the feasibility and viability of the Expo project, the political and social climate of the candidate country and city and the support of relevant parties (government, local authorities and citizens) for the project.

The results of the Enquiry Missions are compiled in a report that is reviewed by the BIE Executive Committee, which forwards the projects it finds viable to the General Assembly. Member States are asked to approve the projects taken into consideration, which will progress to the final vote.

In order to garner support for their Expo project, candidate countries carry out international campaigns as soon as they have submitted their candidature to host an Expo.

During each General Assembly of the BIE held between the notification of candidature and the final vote, candidate countries present their Expo project to delegates of BIE Member States.

At the end of the project examination phase, BIE Member States, on the principle of one country one vote, elect the host country by secret ballot during the BIE General Assembly.

Member States base their decision on the findings of the Enquiry Missions, the appeal of the proposed Expo theme and whether it is relevant for their participation in the Expo, as well as their bilateral relations with the candidate countries. 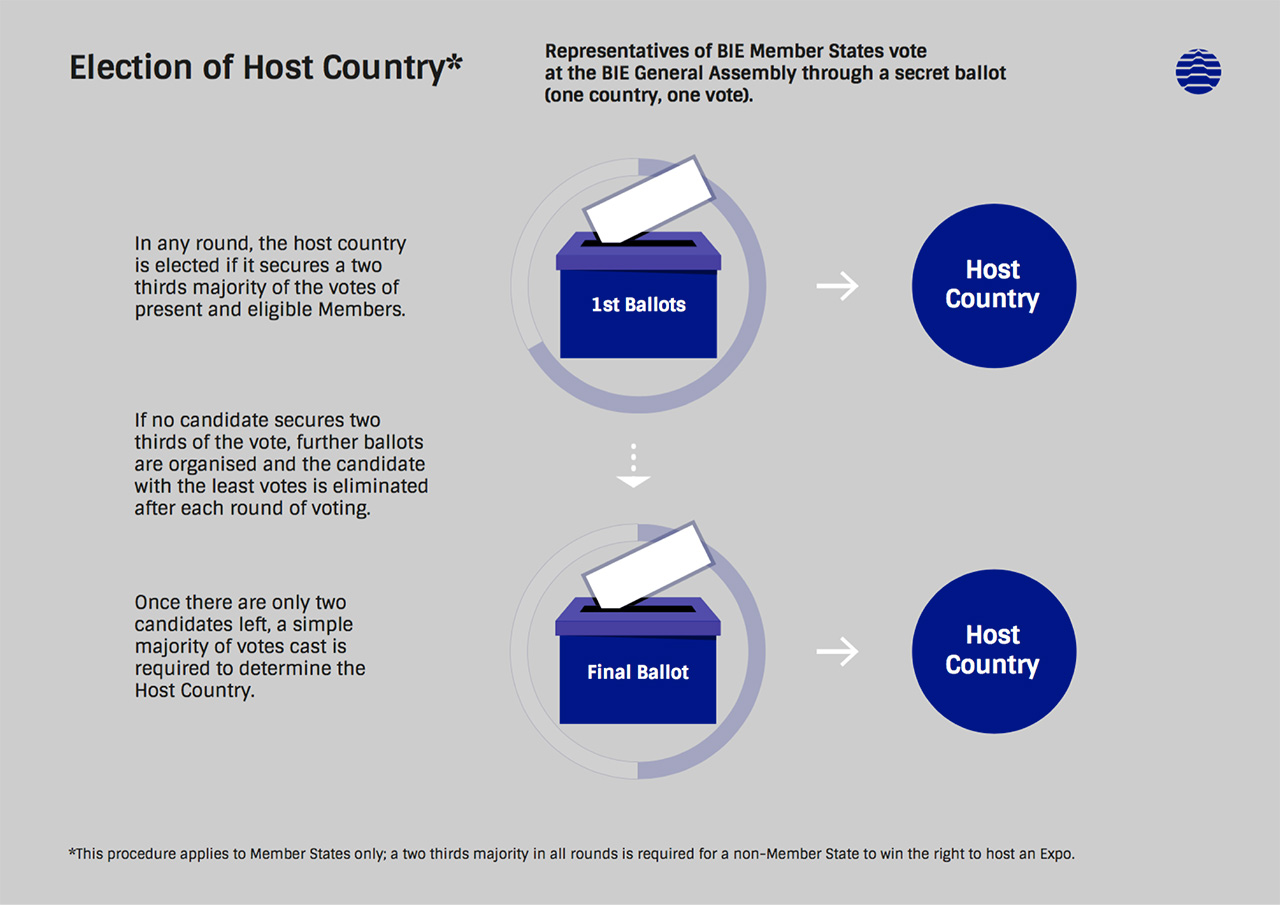 In the case of one or two candidates, the right to host an Expo is awarded to the country that obtains a simple majority of votes for or against.

If there are more than two candidates, then a country must receive a two thirds majority in order to be elected in the first round. If no proposal receives a two thirds majority in the first round, the proposal that receives the least votes is eliminated. This procedure carries on until only two candidates are left. The host country will then be elected by a simple majority.

After a country is elected host country, it continues to work closely with the BIE to formalise the Expo project.

Following the election, the future host country must formalise its Expo project by submitting a complete and definitive implementation plan for the Expo. This formalisation is called "Registration" for World Expos and "Recognition" for Specialised Expos.

The Registration or Recognition dossiers must address:

The dossier must be accompanied by the Expo's General Regulations, the Participation Contracts that will be addressed to the future International Participants, the documents establishing and guaranteeing compensation in case of cancellation and special regulations regarding the theme, the financial and material conditions for participation and the measures to minimize participation costs.

Once submitted to the BIE, the Registration/Recognition Dossier is reviewed by Member States, and the BIE Secretariat coordinates with the Organiser regarding any questions or modifications. Once all points are addressed, the Executive Committee examines the Registration/Recognition Dossier and recommends its approval by the General Assembly. Once approved by the General Assembly, the Expo is then said to be formally “Registered” for World Expos or “Recognised” for Specialised Expos. The host country symbolically receives the flag of the BIE and of Expos on this occasion.

It is only after the Registration or the Recognition of an Expo project that the host country begins preparations in earnest, including:

During this phase, the Expo Organiser is required to report regularly to the BIE:

Once countries and international organisations confirm their participation, they sign a participation contract with the Organiser. The contract includes information about the location and size of the pavilion and is accompanied by a Theme Statement that lays out the development of the theme according to the participant.

The government of the participating country will also appoint a Commissioner-General (in case of World Expos) or Commissioner (in case of Specialised Expos) to serve as the country’s official representative.

Throughout the implementation phase, the Organiser hosts, in cooperation with the BIE, regular International Participants Meetings (IPMs) to co-ordinate with all International Participants and ensure the smooth delivery of all pavilions. Furthermore, for each Expo, a Steering Committee is established, comprising of Commissioners(-General) of participating countries elected among BIE Member States. Along with the BIE, the Steering Committee ensures the application of Expo regulations and facilitates the day-to-day organisation of the Expo in its preparation phase and during the event itself.

World Expos last for up to six months and Specialised Expos last for up to three months. Each day, tens of thousands of visitors pass through ticket gates to be welcomed by the Expo teams, and dozens of cultural and thematic events are organised. To ensure memorable visitor experiences both inside and outside of the Expo site and to provide the tight logistics necessary for the smooth running of the mega-event, thousands of Expo employees, volunteers and participant staff contribute to the success of the Expo during this period.

During the course of the Expo, International Participants organise their own cultural programmes and events, in addition to taking part in Expo-organised activities. Each International Participant also has a national day to celebrate its participation, often including high-profile visits and dedicated events. In the run-up to and throughout the course of the Expo, a series of theme-related forums, conferences and seminars are held involving Expo participants as well as invited experts. The conclusions of these forums are often compiled in a final manifesto or declaration to serve as part of the Expo’s intellectual legacy.

The closing of the Expo is the beginning of a new life for the area. In accordance with the legacy plans indicated in the Registration/Recognition Dossier, the post-Expo management plan is carried out to fit the priorities of the host city and region.

The BIE accompanies countries in this post-Expo phase for the implementation of legacy plan.

1. Information on Horticultural Expos and the Triennale Milano International Exhibition can be found on their dedicated pages.