The Recognition Dossier, an essential element in the organisation of the next Specialised Expo, was presented to BIE Secretary General Vicente G. Loscertales by H.E. Mario Raúl Verón Guerra, Ambassador of Argentina to France. 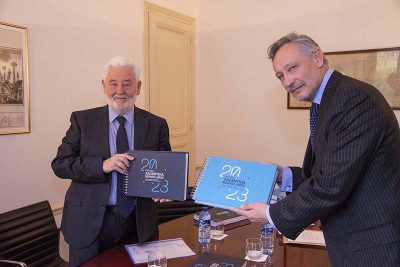 Following its election as Expo 2023 host country during the 162nd General Assembly of the BIE on 15 November 2017, Argentina now enters a phase which will see the formalisation of the next Specialised Expo. The Recognition Dossier presents a detailed plan for the implementation of the Expo, including legislative and financial measures, the Expo site Master Plan, and legacy plans.

The Secretary General of the BIE congratulated the team working on Expo 2023 for their work in delivering the Recognition Dossier, stating: “This comprehensive document is the result of months of collaboration between the Expo Organisers and the BIE. We are pleased to see how the Expo project has developed since the election of Argentina as host country, and look forward to the next phase of planning a remarkable Expo.”

The Recognition Dossier will now be reviewed internally by the BIE in order to prepare for the formal recognition of Expo 2023 Buenos Aires by the General Assembly. Following the Recognition, Argentina will begin Expo preparations in earnest and will be able to invite international participants.

Themed “Creative industries in Digital Convergence”, Specialised Expo 2023 Buenos Aires will be the first Expo of its kind in Latin America. It will take place on a 25 ha site located in Parque del Bicentenario, between 15 January and 15 April 2023.