Russia hosted today a symposium on the theme “Changing the World: Innovations and Better Life for Future Generations”, as part of its candidature for World Expo 2025.

The event, which took place in Paris, aimed to familiarise delegates of BIE Member States with Russia’s proposed theme for Expo 2025 in Ekaterinburg and its goals for the future. 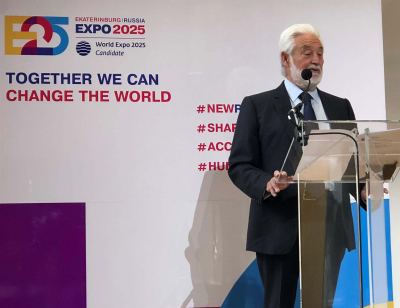 Speaking at the opening of the symposium, the Secretary General of the Bureau International des Expositions (BIE), Vicente G. Loscertales, emphasized the capacity of World Expos to “imagine and create a future world, to exchange on best practices, to open new spaces for ideas, for information flows and for social connections”. The Secretary General added that Russia’s chosen theme for World Expo 2025 “invites us to think of innovation in an ethical, inclusive and responsible manner to better respond to the real aspirations of citizens, to be at the service of a common objective of improving lives”.

Evgeny Kuyvashev, Governor of the Sverdlovsk Region, introduced guests to Russia’s Expo bid, stating that the Expo 2025 Ekaterinburg project enjoys “wide public and government support” and that the region is a scientific and industrial leader in Russia.

This was followed by a keynote speech on the theme by Dmitry Peskov, Special Representative of the President of the Russian Federation on Digital and Technological Development. Mr. Peskov told guests about the project to build a smart city on the proposed Expo site in its legacy phase, to become “the smart heart of an industrial city…launching innovations for everyday use”. Alexander Chernov, Director General of World Expo 2025 Ekaterinburg Bid Committee then developed on Russia’s World Expo project, outlining its main goals and objectives.

The symposium continued with presentations and question and answer sessions based around the theme and subthemes, featuring representatives of business, industry and sport. This was followed by discussions on the creation of a long-term legacy for mega-events with a focus on Russia’s experience in hosting the 2018 World Cup.

With one month until the election of the World Expo 2025 host country, the organisation of forums allows BIE Member States to exchange with candidates on the proposed themes and the questions they raise.

Russia is one of three countries bidding for the right to host World Expo 2025, the other two candidatures being from Japan (Osaka) and Azerbaijan (Baku). Member States of the BIE will elect the host country during the Organisation’s 164th General Assembly on 23 November.