The Foreign Ministry of Kazakhstan organised today an international conference entitled “Astana: The City of Peace”, within the framework of the 20th anniversary of the city becoming the capital of Kazakhstan. 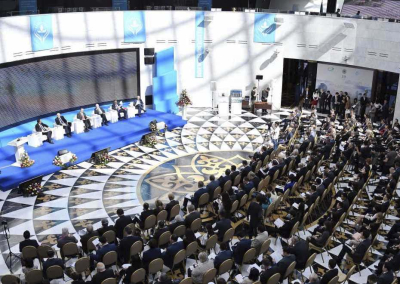 The conference, which was opened by the Minister of Foreign Affairs, Kairat Abdrakhmanov, focused on the city’s political and diplomatic importance to Kazakhstan and the wider Central Asian region. During three panel sessions, guests heard from 30 political, diplomatic and business leaders from across the world who have been involved in and contributed to making Astana a global city.

In a video message shown during the conference, the Deputy Secretary General of the Bureau International des Expositions (BIE), Dimitri Kerkentzes, emphasised the transformational impact of Expo 2017 on the city.

Underlining the key role of Expo 2017 in strengthening Astana’s global reputation, Mr. Kerkentzes drew on the impressive development of Astana in the years leading up to the Expo as well as the importance of its physical legacy. “Expo 2017 made Astana the global venue for dialogue and exchange, fostering new ideas and practical policies. The BIE is fully confident that the legacy phase of the Expo will be a reflection of the great success and scale of the event itself”, concluded the Deputy Secretary General.

Organised under the theme of “Future Energy”, Expo 2017 Astana gathered 115 countries and 22 international organisations, drawing nearly 4 million visitors between June and September 2017. The former Expo site is now a multipurpose cultural, scientific and business hub, which includes the Future Energy Museum, the Astana International Finance Center and the International Centre for Green Technologies.