On 15 June 2016, the 159th Session of the General Assembly of the Bureau International des Expositions (BIE) took place in Paris, which included a presentation from Expo 2017 Astana, the next Specialised Expo that will be organised under the theme ‘Future Energy’. 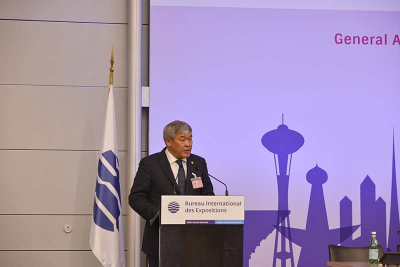 The Commissioner of Expo 2017, Rapil Zhoshybayev, and the Chairman of Board of Astana Expo 2017 National Company, Akhmetzhan Yessimov, both addressed delegates to inform them of the preparations for Expo 2017. The General Assembly heard that construction of the site is going according to schedule and is set to be completed in time for the third International Participants’ Meeting (IPM) in November 2016, giving participants the chance to inspect their pavilions. From January 2017, participants will then be able to begin working on their content on the Expo site.

Mr. Zhoshybayev explained that organisers are continuing their efforts to attract international participants, now that there is less than one year to go before the Expo opens, on 10 June 2017. The Expo 2017 Commissioner stressed that 90 countries and 16 international organisations have already confirmed their participation in the Expo. Additionally, 70 commissioners of national sections have been appointed. 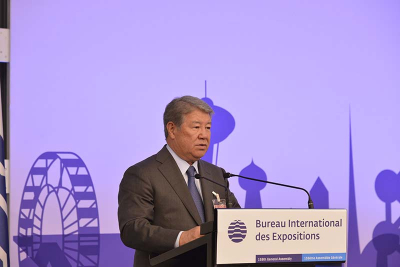 Preparations are also being made to attract and welcome visitors to Astana during the course of the Expo. Mr. Yessimov presented the Expo’s ticketing programme, informing delegates that early bird ticket sales were launched on 10 June 2016, one year before the opening date. Additionally, Mr. Zhoshybayev announced that travel to Kazakhstan will be made simpler as visa requirements will be abolished for citizens of OECD Member States, Monaco, Malaysia, Singapore and the UAE.

Following the presentation, the BIE Secretary General Vicente G. Loscertales expressed his confidence in the preparations of the Expo organisers, adding that the priority now is to ensure that international participants will be ready.