At the 163rd General Assembly of the Bureau International des Expositions (BIE) on 13 June, a delegation from the Netherlands gave an update on the progress made in organising Floriade Expo 2022 Amsterdam-Almere. Preparations for the Horticultural Expo, which was formally recognised by the BIE in November 2017, are now fully underway, Member States were told. 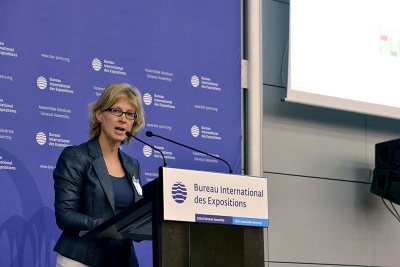 Cindy Heijdra, Agricultural Counsellor at the Embassy of the Netherlands in France, underlined the importance of the theme - “Growing Green Cities” – as a way of contributing to finding solutions to global urbanisation. The Green City concept, which was first introduced at Floriade Expo 2002 Haarlemmermeer, demonstrates how horticulture can improve biodiversity, improve the health of citizens, reduce pollution and promote a sustainable environment. 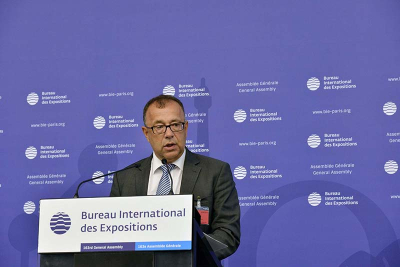 Sven Stimac, Senior Advisor for Floriade Expo 2022, presented an overview of the Expo Organisers’ activities since recognition, as well as future plans. In line with the Masterplan, construction on the 60 ha site is now underway, with over 700 trees planted since early 2018. Located close to the city centre of Almere, the site will be connected by the A6 highway, which is currently under construction and will be opened in 2019. 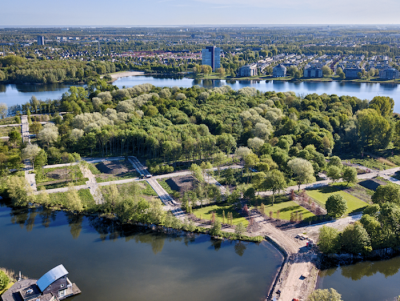 Mr. Stimac drew attention to the content of the site, which is being developed on Green City principles and which will feature an Arboretum based around the four subthemes of the Expo – Green, Food, Health and Energy. The province of Flevoland has already unveiled its Green City Innovation Pavilion, and young start-up community ‘Urban Greeners’ has been commissioned to present Green City solutions on the four-hectare Utopia Island.

Participation will include other Dutch cities and provinces, as well as non-governmental organisations and companies. International participants, some of whom have already expressed an interest, will receive formal invitations from the Government in coming weeks and months, according to Ms Heijdra. The Organiser is also working on the development of Special Regulations to facilitate their participation.

Beyond the Expo site, the Organiser is planning promotional activities for the Expo, including the designation of 2022 as ‘Floriade year’ by the Netherlands Board of Tourism and Conventions. Thematic preparations are also underway; following the first Floriade Dialogue Symposium on urban agriculture on 8 June, the second symposium is scheduled for November 2018.