The Bureau International des Expositions (BIE) has published the 2020 edition of its annual Bulletin, this year entitled “Expos, citizens and social capital”.

The BIE Bulletin is an annual publication focusing on a specific theme or issue arising from Expos, offering an array of expert viewpoints. The 2020 edition is dedicated to the connections between citizens and communities that are created, developed and strengthened at Expos, drawing on concrete examples from World and Specialised Expos of the 21st century. Featuring articles by academics, civil society actors and influential figures from Expo organisers, the chapters of the 2020 edition of the Bulletin illustrate the ways in which these events spark curiosity, generate interest in the theme, create new forms of participation and transform behaviours. 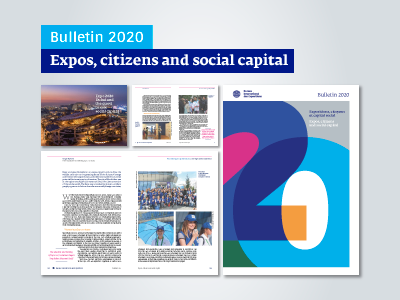 Dimitri S. Kerkentzes, the Secretary General of the BIE, indicated: “As well as being high-profile gatherings of nations with a lasting economic, urban and cultural impact, Expos are public events that involve, inspire and educate citizens in a collective project. By supporting the engagement of different sections of society, Expos empower communities and connect citizen actions as part of an endeavour that strengthens social capital, and therefore, helps build a better society for tomorrow.”

Beginning with the journey of what makes an Expo, the first chapters address the engagement of citizens in all stages of organising an impactful Expo that creates shared new experiences. The Bulletin then addresses volunteering and the lasting social impact of this large-scale mobilisation of citizens. The final chapters go beyond the confines of the Expo organisers to reveal broader social participation in these events, notably through NGOs and associations, leading to new forms of dialogue and greater global awareness of key challenges.

Contributors to the Bulletin include: