An international jury composed of nine members has started a four-day visit of Expo 2017 Astana in order to decide the winners of the Expo 2017 Official Participant Awards, which will be announced on BIE Day, on 9 September. Members of the jury are assessing both the display and presentation of the pavilions of Official Participants, as well as their interpretation of “Future Energy”, the theme of Expo 2017 Astana. 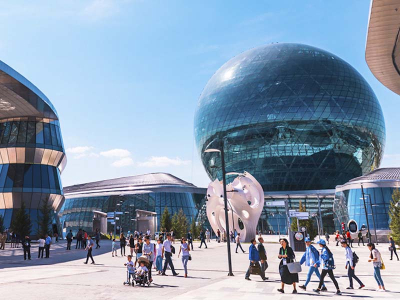 The jury, composed of international and Kazakhstani experts in a range of relevant fields, includes Steen Christensen, the President of the General Assembly of the BIE, and Dimitri Kerkentzes, Deputy Secretary General. The internationally-appointed experts represented on the jury include architect and urban planner, Joan Busquets, Ambassador of Spain to Iran Eduardo López Busquets, and the former Secretary General of Expo 2005 Aichi, Toshio Nakamura. The nationally appointed jury members include the Head of Department of Architecture & City Building of Astana, Kairat Kozhamzharov, the President of Nazarbayev University, Shigeo Katsu, the Chairman of Samruk Energy JSC Almasadam Satkaliev, and Eurasian National University Professor Altay Alomgazin.

This is the second visit of the jury, following an initial review that took place in July. The recipients of the awards will be announced on BIE Day, held on 9 September, the penultimate day of Expo 2017.

Over 100 international participants are participating in Expo 2017 Astana. Participants either have their own pavilions with a surface of up to 1,000m2, or present their displays in dedicated spaces within joint plazas.

Awarding participation is a longstanding tradition of Expos, dating back to Expo 1851 in London – the Great Exhibition. After a pause during which Expos did not feature awards, they were reintroduced ahead of Expo 2005 Aichi. Expo Awards honour both exhibition design and theme development, and are divided into categories according to the size of pavilion.