The Bureau International des Expositions (BIE) has paid tribute to Organisers and Participants alike as part of BIE Day at Expo 2017 Astana. Taking place on the penultimate day of the Expo, BIE Day is an opportunity for the BIE and its Member States to celebrate the Expo as it draws to a close, involving all those who have contributed to its success. 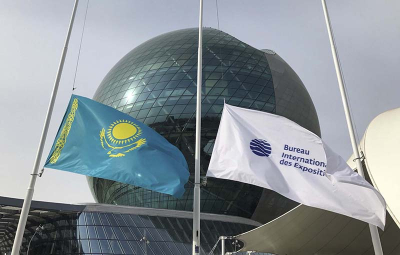 After celebrating their own national days throughout the duration of the Expo, BIE Day is an occasion for Member States to gather alongside BIE officials and Expo 2017 representatives to look back on what has been achieved. As the BIE is responsible for overseeing Expos from their candidature phase through to their execution and legacy, the event also symbolises the continuity of Expos, and involves the host countries of upcoming Expos – China, host of Horticultural Expo 2019 Beijing and the United Arab Emirates, host of World Expo 2020 Dubai.

The ceremony featured high-level participation from the Organisers of Expo 2017, demonstrating their longstanding cooperation with the BIE. Addressing attendees on the National Day stage, following the flag ceremony, the Chairman of the Board of Astana Expo 2017 National Company, Akhmetzhan Yessimov stated "Expo 2017 is a unique mega-event not only for Kazakhstan, but also for the whole post-Soviet region and for Central Asia." 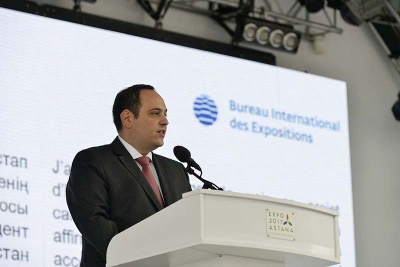 The Deputy Secretary General of the BIE, Dimitri Kerkentzes, thanked “all those who have made Expo 2017 Astana such a success.” Mr. Kerkentzes added: “organisers and participants, with the cooperation and guidance of the BIE, have created an event that has improved our understanding of the energy challenges facing us and future generations.”

Expo 2017 Commissioner Rapil Zhoshybayev then took to the National Day stage, adding: “Expo 2017 Astana has become not just a platform for innovative technologies, but also a place for negotiations, meetings of different cultures and discussions”. 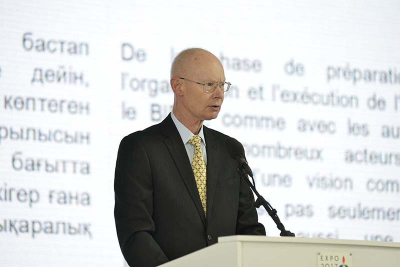 President of the General Assembly of the BIE, Steen Christensen, emphasised the importance of the “Future Energy” theme, calling on all participants to “commit to actionable measures and consider the next steps in relation to this theme.”

The ceremony included a cultural programme featuring dancers from Astana, as well as performances by China and the United Arab Emirates.

Concluding the festivities, the BIE Day Awards Ceremony will be held this evening in the Energy Hall, in an event featuring a rich array of Kazakh cultural performances. The Awards ceremony includes the announcement of the recipients of the Expo 2017 Official Participant Awards, the BIE-Cosmos Prize and BIE Medals and Certificates.

The winners of the Expo 2017 Official Participant Awards are based on the decision of an international jury, which has assessed each pavilion’s exhibition design, and development of the “Future Energy” theme. The BIE-Cosmos Prize, jointly awarded by the BIE, the Expo ‘90 Foundation and Expo 2017 Astana, is a grant attributed to a not-for-profit project working in the field of “Future Energy”. BIE Medals and Certificates are awarded by the BIE to individuals and organisations who have made major contributions to the success of the Expo.

The Bureau International des Expositions (BIE) is the intergovernmental organisation embodying the commitment of its 170 Member States to lead, promote and foster International Exhibitions for the benefit of the citizens of the international community. In 2012, BIE Member States elected the Republic of Kazakhstan as the host of Specialised Expo 2017.