The French city of Lille, known as a centre of the textile industry, hosted an International Textile Exhibition in 1951. This Special Exhibition was recognised by the BIE on 15 November 1950, a few months before its grand opening.

The Expo took place at the ‘Grand Palais de la Foire de Lille’. Erected in 1932, this building was badly damaged during the Second World War, but the decision was taken to renovate it for the Expo. Originally designed by local engineer Désiré Douniaux, the building was the largest space in Europe at the time to stand without intermediary pillars, spanning 120 x 115 metres, with a height of 20 metres.

Under the management of architect Jean Prouvé, the Palace underwent major renovations in 1950 and 1951, with the addition of a new 137 x 31 metre red chrome outer frame. Renovation was finished only one day before the opening of the Expo on 27 April 1951, with the Palace being inaugurated by the Minister for Reconstruction and Urban Planning, Claudius Petit. 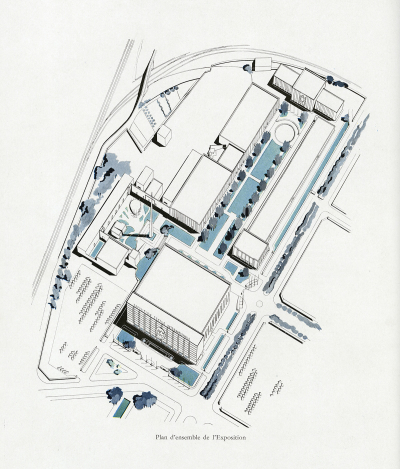 An opportunity for the Textile Industry to exchange ideas

The Expo itself was opened to the public on the 28 April 1951 by Georges Bidault, the Vice-President of the Council of Ministers, in the presence of 300 political and industrial figures. These included the Secretary of State for Industry and Commerce, André Guillant, as well as Maurice Schumann.

Twenty-two countries were represented at the Expo, with delegations from near and far including Germany, Belgium, South Africa, Pakistan, Japan, New Zeeland and Australia.

Thematic days were organised throughout the duration of the Expo, with specific days dedicated to silk, rayon, nylon, wool and cotton. The Expo also facilitated meetings between producers, designers and customers, and hosted debates such as those organised by the General Assembly of the Wool Committee or the Cotton Union.

A large variety of textiles and their different usages were showcased at the Expo, but it was first and foremost an opportunity for designers and the industry to exchange on production methods.

The International Textiles Library proved very popular with visitors. It contained the prominent technical and economic works of the time as well as periodical publications dedicated to fashion and textiles.

The varied uses of textiles

The Expo also demonstrated the multiple uses of fabrics in different sectors, some of which were well-known - high fashion, dying, clothing – while others were more innovative, including textile sculptures and paintings. On International Textile Day, which took place during the Expo, Parisian design was highlighted at a fashion gala in the Lille Opera House.

While the Expo was only open for three weeks, it attracted over 1.5 million visitors from across France and further afield. As a meeting point for the international textile industry, the Expo acted as a platform to create links between textile providers and designers. The Palace remained in place until 1993, when it was destroyed to make may for a new Conference Centre.