Expo 1974 in Spokane, in the US State of Washington, was the first to have a theme linked to the environment. It received recognition by the 70th General Assembly of the BIE on 24 November 1971. With the motto “Progress without Pollution”, the emblem of the Expo was the Mobius Strip, symbolising how humankind and the environment are perpetually joined. This connection was further emphasised by the blue, green and white colours of the logo.

Spokane was a peaceful city with an economy that had traditionally relied on the Spokane River and extractive industries. As one of the smallest cities to ever host an Expo, local officials saw the event as an opportunity to put Spokane on the map and keep up with economic and cultural progress in the United States, as well as to revitalise its downtown area, considered undesirable and unsightly. 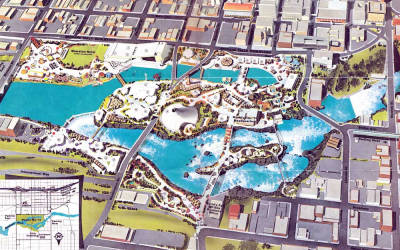 The 40-hectare Expo site was developed on and around Havermale Island, adjacent to the city’s downtown district. Much of the land recovered for the Expo was previously occupied by the Great Northern Railroad Depot, seen as an eyesore by local residents. The planning of the Expo also included a large-scale clean-up of the city and its surrounding environment.

A crowd of 85,000 people attended the opening of the Expo on 4 May 1974. To demonstrate the improvement to the local environment, 1,974 trout were released into the Spokane River as part of the opening ceremony.

The focal point of the Expo site was the US pavilion, made of a web of steel and vinyl. It was the Expo’s largest pavilion and is one of the few structures built for the Expo that still stands to this day. The pavilion housed a courtyard laying out the country’s plans to tackle environmental issues, and also featured one of the first IMAX movies - “Man belongs to the Earth".

Huge butterfly-shaped kites marked the beginning and end of each section of the Expo, with the various exhibits enough to keep visitors occupied for three full days. At the end of each day, there was a fireworks display which formed part of the celebrations of the United States’ bicentennial. Several parades and activities were organised throughout the duration of the Expo to showcase local and national culture. These included the Folk Life Festival, on the north bank of the Spokane River, where visitors could enjoy logging shows and interact with Union Pacific Railroad workers.

Besides the host nation, nine countries had their own pavilions at Expo 1974. Canada showcased its outdoor activities on the naturally beautiful ‘Canada Island’, while China, Japan and the Republic of Korea all provided visitors with cultural shows. The USSR was also represented at the Expo, allowing American visitors to get their first glimpse of Soviet culture.

The Philippines and West Germany shared a pavilion, with the former focusing on the beauty of tradition while the latter showcased technology and its impact on environmental issues.

The Australian pavilion featured an opera house modelled on the iconic Sydney Opera House. After the shows, performers were invited to parties organised on the rooftop terrace.

The Spokane Expo was a platform for the discussion of environmental issues, including local topics such as the protection of the Spokane River with its rapids and waterfalls. The environmental protection focus of the Expo was recognised and praised by the United Nations on the occasion of the first ever UN World Environment Day in 1974. At a time when environmental concerns were not mainstream, the Expo’s 5.6 million visitors left with new thoughts about sustainability and the state of the planet.

Following the Expo, the site was converted in Riverfront Park, which is popular with locals and offers visitors a stunning view of the Spokane Falls. Year-round entertainment is available in the park, including a gondola and sports competitions. The former United States pavilion is used as an ice rink during the winter months, and serves a range of other functions throughout the rest of the year.

Expo 1974 enabled the revitalisation of the centre of Spokane by clearing away decaying industrial buildings. The city, which has benefited from increased national and international recognition as a result of the Expo, went on to enjoy a prolonged period of economic growth in the following decade.