This exposition remains, in the collective imagination, the symbol of Paris' influence during the Belle Epoque. With an especially large site (ten times bigger than the 1855 one) and a record attendance, it was an indisputable success. The Exposition of 1900 is a showcase for the 19th century, but at the dawn of a new era, it also looks to the future and searches for modernity at all costs. This desire can be seen through the significant use of electricity: the pavilions and the Eiffel Tower are illuminated all night, creating an enchanting atmosphere to the Exposition. There are technical achievements: a moving walkway takes visitors from Quai d'Orsay to Rue des Nations. Other inconspicuous inventions are the result of the Exposition such as the first edition of the Michelin Guide. 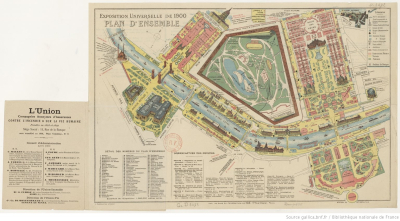 Paris and the Belle Epoque

The Belle Epoque is the scene of the Exposition of 1900. It is a period of economic growth, insouciance, amusement and faith in progress. The Exposition atmosphere is full of this joy. It even looks like a funfair with its attractions and the Big wheel. But it is also and above all a great popular event: France, which only had 41 million inhabitants at the time, hosted almost 51 million people in Paris on this occasion.

Place of honour for Art Nouveau

Whereas the first world's fairs had their roots in the Industrial Revolution, the Exposition of 1900 is different because of its artistic approach and its promotion of Art Nouveau. The Triumphal Gateway, a monumental polychrome structure, designed by the architect René Binet, is a real showpiece. Art Nouveau can also be found in metro station entrances, made by Hector Guimard. This artistic movement, which aims at getting out of a national sphere considered to be too narrow, is completely in line with the will and the curiosity to open to the world illustrated by the World Tour Panorama, one of the most famous attractions of the Exposition.

To amaze and to dazzle the visitor, this was the purpose of the Exposition of 1900. The list of attractions is therefore very long. The Great Refractor of the Palais de l'Optique, the Exposition's masterpiece, enabled people to see the Moon as if it were a metre away. Reconstitutions also proved popular: the Old Paris or the Swiss village. The Mareorama can also be mentioned: it gave the impression of a sea journey.

The Exposition of 1900 is the one which left the biggest heritage to Paris. Indeed, the first metro line between Porte de Vincennes and Porte Maillot was open for the occasion. Subsequently, the network developed continuously. Other constructions are still part of the current Parisian landscape: the Alexandre III Bridge, a symbol of French-Russian friendship or the Petit Palais which became one of the 14 Paris City Museums and the Grand Palais which now hosts very prestigious exhibitions.