Theme
Works of Art and Science, Agricultural and Industrial Products of All Nations

Brussels had previously run for the organisation of Expo 1905 to celebrate the 75th anniversary of the national independence, but the city of Liège had won the right to host the event.

At the turn of the century, Belgium benefited from international prestige thanks to its industrial development and the success of its past Expos (Anvers 1885 and 1894, Brussels 1897 and Liège 1905). Being a strategic crossroads between Germany, the UK and France, Belgium wished, with Expo 1910, to reaffirm its industrial progress and its colonial power. Synonymous of national power at the time, colonies were very much in the spotlight and showcased in many participants' pavilions. Visitors could thus discover the Algerian pavilion, the Indochinese pavilion, the Malagasy or the Tunisian pavilions. 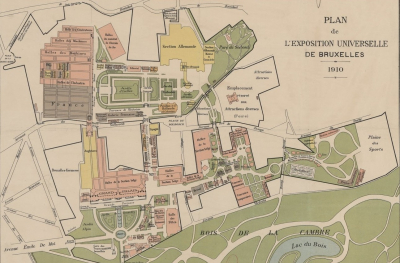 The Solbosch plateau and the development of Brussels

The 90 ha Expo was held on the Solbosch Plateau. A separate fine arts section was held in the Centenaire Park, while a colonial section was held in Tervueren. The presence of the Expo on the Plateau was a great contribution to the territorial expansion and urbanisation policies of the city: the city of Ixelles gave 62,64 of its territory to Brussels. Moreover, a 2 km railroad was built to link the site to the existing roads so that visitors could get to the site by tramway from the city center. A major communication route, avenue des Nations, was also created to extend the Louise Avenue along the woods of the Cambre.

At the entrance, a reconstitution of old Brussels, called "Brussels Kermess" was the key attraction of the Expo. The "Water chutes" and the "Scenic Railway" were also a great source of entertainment for visitors. The site also offered many leisure spaces and gardens and was overlooked by the Cambre woods.

Many congresses on a variety of issues

The Brussels World Expo held many congresses dedicated to experts and the general public on issues such as horticulture, international associations, tropical astronomy, or intellectual property.

On the evening of 14 August, a fire originated in the post, telegraph and telephone offices and destroyed part of the exhibition. Brussells Kermess, the English section and a part of the French section were damaged. The spoil was hidden behind a decorated wall and the objects that were saved were exhibited.

The Université Libre de Bruxelles and the Franklin Roosevelt Avenue

In the 1920s, the Université Libre de Bruxelles settled on the Solbosch Plateau. The avenue des Nations was renamed Franklin Roosevelt avenue.