Floriade Expo 1960 Rotterdam was the first Horticultural Exhibition to be held under the auspices of the Bureau International des Expositions (BIE) and was officially recognised at the organisation’s 43rd General Assembly on 5 May 1959. Opened on 25 March 1960 by Princess Beatrix, the future Queen, it was also the first edition of the Floriade, which has since taken place every decade in the Netherlands.

With the motto “From Seed to Strength”, the Floriade took place in Het Park, a public park, which was originally designed in 1852 as an English landscape park by the Dutch architect Zocher and his son. 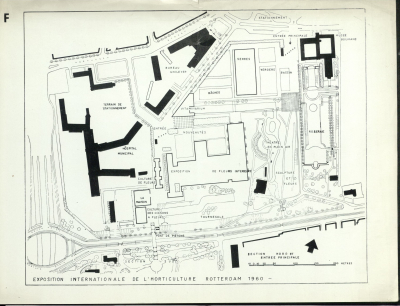 In preparation for the Expo, landscape architects J.T.P. Bijhouver and M.J. Vroom began redesigning Het Park in 1958, cables car were added and the Euromast observation tower, designed by architect H.A. Maanskant, was built. 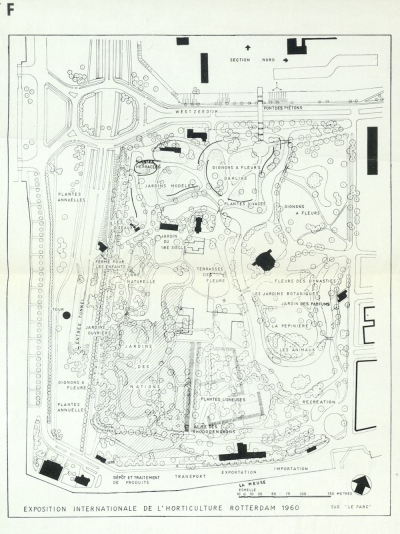 Het Park hosted the majority of the exhibitions, with its newly created 18th century-style gardens, designed by J.H.R. van Koolwijk, which surrounded the country estate, de Heuvel. Along the west edge of the park, garden and landscape architect C. P. Broerse created a wildlife garden, hosting a vast array of indigenous plants to reflect the theme of the “Forest and Field” section. A large empty ditch between the Park and De Heuvel was also transformed into the Rhododendron Valley, while temporary floral displays from the Netherlands as well as from international participants embellished Het Park.

In addition, a programme of indoor thematic exhibitions was organised in separate locations notably within Ahoy Hall and Energiahal, two convention centres built in the 1950s.

Visitors could enjoy panoramic and spectacular view of Het Park, the city, its port and beyond by going to the top of the 101-metre-high Euromast tower – the tallest building in the Netherlands at the time. Alternatively, the 30-metre-high cable car, which transported approximately 4,000 people per hour, also offered views of the site.

One of the greatest legacies of Floriade Expo 1960 Rotterdam was the transformation of Het Park, which can still be seen today. Some of the garden displays in Het Park remain today, albeit in a more simplified form than during the Expo, including the wildlife gardens, the 18th century gardens and the Rhododendron Valley.