Floriade Expo 1972 Amsterdam was the second edition of the Floriade. It was formally recognised by the BIE at the 66th General Assembly on 14 November 1969 and ran from 26 March until 1 October. 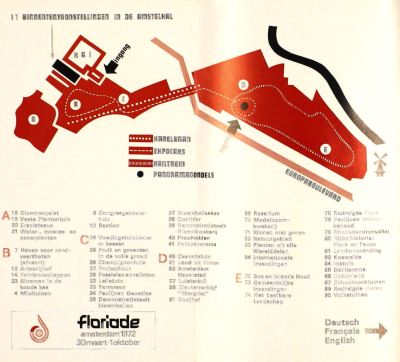 Welcoming more than 4 million visitors, the Expo took place in Amstelpark, Beatrixpark and the Amsterdam RAI Exhibition and Convention Centre. Amstelpark, located along the banks of the River Amstel in the south of Amsterdam, was created specifically for the event by Bert Mos to host some of the outdoor exhibitions. Beatrixpark, which was created in 1936 and was designed by the Dutch landscape architect, Jakoba Mulder, was redesigned to display the remaining outdoor exhibitions, while the 12,000m2 Amsterdam RAI Exhibition and Convention Centre hosted the indoor exhibitions. The different sites were connected by a Floriade train, a cable car, Expo cars, and the 40-metre-high gondolas, which allowed visitors to travel easily between the sites. To enjoy a panoramic view of the Expo sites and the city, a Ferris wheel was also installed at the main entrance of Amstelpark.

The main site was the 70-hectare Amstelpark, where sections were designed according to horticultural specimens, including a “Dahliarama” which displayed more than 40,000 dahlias, and a “Rhododendron Valley”, which showcased more than 8,000 rhododendrons. Other important highlights at Amstelpark included the Rosarium, the Lily Exhibition, the Butterfly Garden, the Greenhouses and the Cascade Gardens. Amstelpark also included an international section, which showcased plants from around the world. Eight different countries were represented, as well as the six capital cities of the European Common Market countries at the time.

Eleven temporary indoor exhibitions were arranged in the Amsterdam RAI Exhibition and Convention Centre throughout the Expo. The themes of these exhibitions ranged from exotic plants to international floral art and included a great variety of educational material and entertainment. Along the Europa Boulevard, the Expo pavilion also played host to many exhibitions, as well as a cinema.

The legacy of Floriade Expo 1972 Amsterdam is very present in the city today. Although some changes have been made, both Beatrixpark and Amstelpark continue to be popular parks that are enjoyed by the people of Amsterdam and tourists alike. Within Amstelpark, the Rhododenron Valley, the Rosarium and the Orangery are beloved memories of the Expo which continue to draw visitors today. The Floriade was also highly influential on the structure of Amstelpark. Its themed gardens and pavilions, as well as its spacious boulevards, paths and avenues are distinct features of the time. In Beatrixpark, the pavilions are still present, alongside the Arstenhijof and other special gardens created for the Floriade. In 2005, the oldest part of the park was granted city monument status.