Floriade Expo 1982 Amsterdam was formally recognised by the BIE on 20 June 1979. It was the second Floriade to take place in Amsterdam and the third Horticultural Expo to be held in the Netherlands. 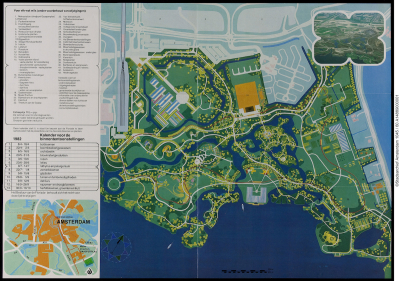 The Expo took place in the Gaasperpark, a previously undeveloped area surrounding the artificial Gaasperplas Lake, to the west of the river Gaasp. The site, chosen for its strategic location near two major motorways and adjacent to the terminus of one of Amsterdam’s new metro lines, was developed from scratch between 1977 and 1982.

The area’s geography – exposed to wind and with high groundwater levels and varying soil types – was taken into account by planners, under the direction of J.H. van der Meeren, with Pieter van Loon and Ron Koek as the lead designers. Large trees were planted around the shores of the lake, and novel planting techniques were used with the use of fast-growing species in the years leading to the opening of the Floriade.

Specifically designed as a recreation area for the city, the landscaping of the site intended to create a gradual transition from the built-up area to a semi-natural area and then a fully natural zone with wild plants on grazing land. With varied elevations, a capricious shoreline and winding paths, the park was designed as a romantic haven, which was emphasised by formal elements such as the Berceau, the Esplanade and the rose garden.

Visitors to Floriade 1982 could discover a rich array of displays, varying from traditional Dutch flowers – many of which were already in bloom when the event opened – to fruit and vegetables, shrubs, and imported species from Asia and Africa. In terms of new technology, hydroculture – growing plants in water with added nutrients – was one of the major novelties on show, while visitors could also learn about computer systems used to regulate growing in greenhouses.

Popular attractions included a 7,000m2 flower hall which hosted 13 different exhibitions throughout the event, as well as the Butterfly House and the romantic Rose Garden. Aside from walking around the site, it was possible to take the Floriade train, or to see the site via a tour on a horse-drawn barge. To add to the Floriade’s entertainment offer, a 65-metre viewing tower allowed visitors to enjoy a panorama of the whole site, while there was also a planetarium and a children’s playpark.

International gardens were mainly located in the east side of the park, in a strip along the Gaasp, featuring gardens from China, Japan, Belgium, Russia, Italy and West Germany. Known as a “dreamers” garden, the Chinese garden proved particularly popular with its miniature landscapes, while the Japanese garden showcased a wide range of Azelias and Bonsai trees. The UK cities of Liverpool and Manchester, and the Canadian city of Toronto also participated in the Floriade with their own gardens. Aside from the outdoor gardens, several countries participated in the Floriade through exhibits in the indoor halls, including a tropical exhibition from Florida.

Following the end of the Expo, which gathered more than 4.6 million visitors, Gaasperpark was transformed into a new and spacious public park for Amsterdam, continuing the Floriade legacy of creating urban green space. It remains popular among residents as a peaceful space with its winding paths, lush vegetation and whimsical shoreline where visitors may swim in the summer months. Within the park, the Expo’s Planetarium was later converted into a conference centre. The Floriade was considered a success for the city, encouraging four Dutch municipalities to show an interest in organising the next edition of the Floriade, in 1992.