Theme
Horticulture is being involved in a continuous process of renewal in the field of quality, technique, science and management

Floriade Expo 1992 Zoetermeer was the fourth edition of Floriade to be held under the auspices of the BIE. Inaugurated by Queen Beatrix, the Horticultural Expo ran from 10 April to 1 October. Zoetermeer, a growing town located 10km from the Hague, was selected by the Netherlands Horticultural Council in 1984, and the Expo was recognised by the 103rd General Assembly of the BIE in 1988. 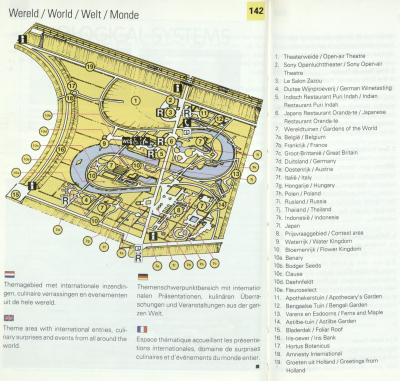 The selected site for the Floriade lay in a polder landscape, 5 metres below sea-level and previously used for pasture. Starting with levelling and draining, it took a total of six years to develop the site, with organisers aiming at designing a “Garden of Eden”. This design was a triangular “goose-foot” site, with three axes fanning out – a 1,200-metre flower runner axis, a central axis with a 3.6-metre dyke, and a water axis connecting the Flora pond to the Goosefoot pond. At the centre of the site, a 76-metre tower offered visitors a panoramic view, while the caterpillar monorail and vintage trams from the Hague enabled easy access around the gardens and along the flower runner.

In terms of exhibitions, the Floriade site was divided into seven theme areas: Trade, Transport and Distribution; Production and Energy; Consumer; Environment; Future and Science; World; and Recreation. One of the largest pavilions – the Exposarium – was located in the first of these areas, with 8,000m2 of permanent and temporary exhibition space dedicated to Dutch and international flowers.

The issue of the environment was of notable importance at Floriade 1992, notably via Ecodrom, the National Environment Pavilion. Built as an open-walled circular structure from recycled steel and concrete, the pavilion drew attention to the planet’s limited resources and the importance of clean air and water. With interactive exhibits and a cinema, it proved popular among adults and children alike.

New technologies were also highlighted, with the fruit and vegetable pavilion demonstrating the latest computerised techniques to direct nutrient-treated water to plants and to recycle the excess. The pavilion also made use of natural predators to control insects, thus reducing damage to the environment.

A total of 23 countries participated in the Expo, of which 13 created their own outdoor gardens. International participants also made significant contributions to the cultural programme, giving music and dance performances and organising national days throughout the Expo.

In terms of visitor experience, the Expo site also featured a meditation garden, a scented garden, and a series of playparks for children. Specially designed for the Floriade, a series of artworks known as “Allocations” presented original creations of 23 visual artists. One of these works - a six-metre flowerpot in the shape of a head, designed by Rob Scholte – became one of the main symbols of the Floriade, known as the Colossus of Zoetermeer.

As a key project in the expansion of Zoetermeer, Floriade Expo 1992 provided a major positive impulse to the town’s development. With the area having been rendered developable, the northern part of the Floriade site became a new residential zone, while the southern and western parts were maintained as green spaces, becoming the Floriadepark. The national gardens of the United Kingdom, Bangladesh, Belgium and Hungary were transferred to the botanical garden of Haren, where they remain to this day.