Theme
Man and Nature - Marching into the 21st century

Horticultural Expo 1999 was organised in Kunming, China, under the theme “Man and Nature – Marching into the 21st century”. The Expo, recognised by the General Assembly of the BIE on 7 December 1994, was initially due to take place in Beijing, but in 1995 the Chinese Government opted to change the host city to Kunming, the capital of Yunnan Province, an area renowned for its agriculture and its rapidly developing horticultural sector. The 218-ha Expo site was located in Haigen, 7km north east of the centre of Kunming and close to the Golden Temple, a historic Taoist sanctuary. 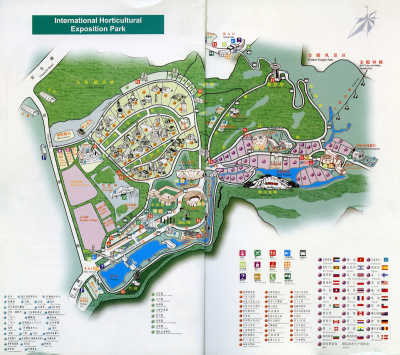 The Expo opened its gates to the public on 1 May 1999 following a grand opening ceremony attended by the President of China Jiang Zemin and a live broadcast gala show dubbed “The Romance of Heaven on Earth.” As the first BIE-sanctioned International Exhibition to be organised in China, the Expo drew a great deal of national and international media attention, aided by the snub-nosed monkey mascot “Linling” and a weekly bilingual Expo newspaper, the “Garden Gazette”.

Visitors to the Expo had the chance to discover Chinese and international horticultural throughout the undulating site, which was divided into a series of zones, connected by a 10km network of paths. To facilitate transport in and around the site, some 600 electric buses were available to visitors. The outdoor gardens were split between three main areas (Chinese, International and Enterprise), in addition to six thematic gardens that were particularly popular among visitors (Bamboo Garden, Tea Garden, Bonsai Garden, Woods Garden, Medicinal Herbs Garden, Fruit and Vegetable Garden).

The 19,927m2 China Hall was the largest indoor exhibition hall, showcasing the gardening and horticultural specialties of China’s provinces, regions and cities, as well as national companies in the sector. In the Grand Greenhouse, built with high-photo-permeable and thermal insulating panels, visitors could discover over 1,200 varieties of tropical, temperate and frigid plants. The Expo’s theme was directly addressed in the Man and Nature Hall, which addressed environmental problems and displayed achievements and solutions necessary to ensure coordinated development.

Beyond the gardens and plant exhibits, the organisers promoted the development of the theme by holding a series of international conferences and academic round-table meetings, focusing on technological progress and protection of the environment.

A total of 70 countries and 26 international organisations participated in Expo 1999 Kunming, of which 34 designed their own outdoor garden. In addition to national day celebrations, many participating countries organised cultural activities, including a French wine festival, Japanese folk theatre performances, and a Scottish pipe band show. These events complimented the Expo’s own cultural programme, which included a mix of Chinese and international performances at the Century and Performance Plazas, and a daily lantern show representing the traditional folk art of Yunnan.

After gathering more than 9.4 million visitors during the Expo, the site was transformed into a public park under the name “World Horticultural Expo Garden”,  which remains a popular recreation area and one of the city’s most visited tourist attractions.