Theme
To Express the Love for Humanity

Expo 2006 Chiang Mai, which ran from 1 November 2006 to 31 January 2007, was hosted in celebration of the Diamond Jubilee and 80th birthday of King Bhumibol of Thailand, at the time the world’s longest reigning monarch. The theme “To Express the Love for Humanity”, reflected the lasting love between nature and mankind and the name of the Expo, Royal Flora Ratchaphruek 2006, consecrated the national flower of Thailand, the Ratchaphruek, also known as the Golden Shower tree. It was recognised at the 138th General Assembly of the BIE on 1 December 2005. The 80-hectare site was located on the land of the Royal Agricultural Centre in the Chiang Mai province. 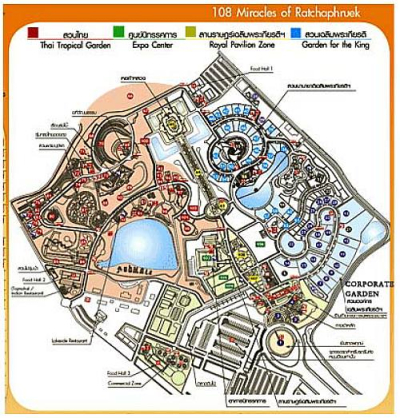 Welcoming 3.8 million visitors from around the world, the Expo showcased many temporary thematic displays and permanent exhibitions. Thirty-two countries presented indoor and outdoor gardens, rare plants exhibitions and took part in cultural performances. Over 2.5 million trees of 2,200 species were planted for the event, as well as numerous tropical plants and flowers.

One of the main highlights of the Expo was the Gardens for the King, which featured the 23 international and 22 corporate gardens. The international gardens reflected horticulture from each country. Popular features included a model of Mount Fuji in the Japanese gardens, and the Tang garden, presented by China. The corporate gardens showcased displays from Thai State enterprises, alongside major corporations from both Thailand and abroad.

The 10-hectare Thai Tropical Garden displayed a variety of tropical horticulture both indoors and outdoors, and aimed to showcase the diversity of the country’s fruits, plants, flowers and herbs. The area also presented traditional housing and lifestyle from the country's different regions.

The indoor exhibitions were located in several pavilions, including the Ho Kham Royal Pavilion, which was inspired by Lanna architecture, the typical style of architecture in northern Thailand. The Royal Pavilion, the Grand Amphitheatre as well as an indoor exhibition hall were all located at the Royal Plaza, where a variety of specialist exhibitions and plant competitions were held. A Bodhi tree was planted at the Royal Plaza to pay homage to King Bhumibol. In addition to the outdoor and indoor exhibitions, the Expo presented 45 cultural shows originating from all over Thailand and 11 international cultural shows, which included traditional dance and music.

The park was reopened to the public in 2008, where many of the original features and gardens from the Expo can be seen. The Expo initiated the development of the Horticultural Knowledge Centre, which is now a hub for horticulturalists from around the globe in technological and knowledge exchange and promotes Thailand as a centre of the production and exportation of horticultural products. Following the success of Royal Flora Ratchaphruek 2006, Thailand has continued to host horticultural exhibitions, including another one in Chiang Mai in 2011.